Our nine All-Star teams shone bright at this year's tournaments. Congrats, teams, on your great successes!

Four PYSA teams qualified to compete at the state tournaments in July.  Congratulations to 14U, 10U Gold, 8U Gold and 8U Silver!

Two PYSA teams qualified to compete at Western Nationals! Congratulations 14U and 10U Gold!

Santee Bring on the Heat Tournament 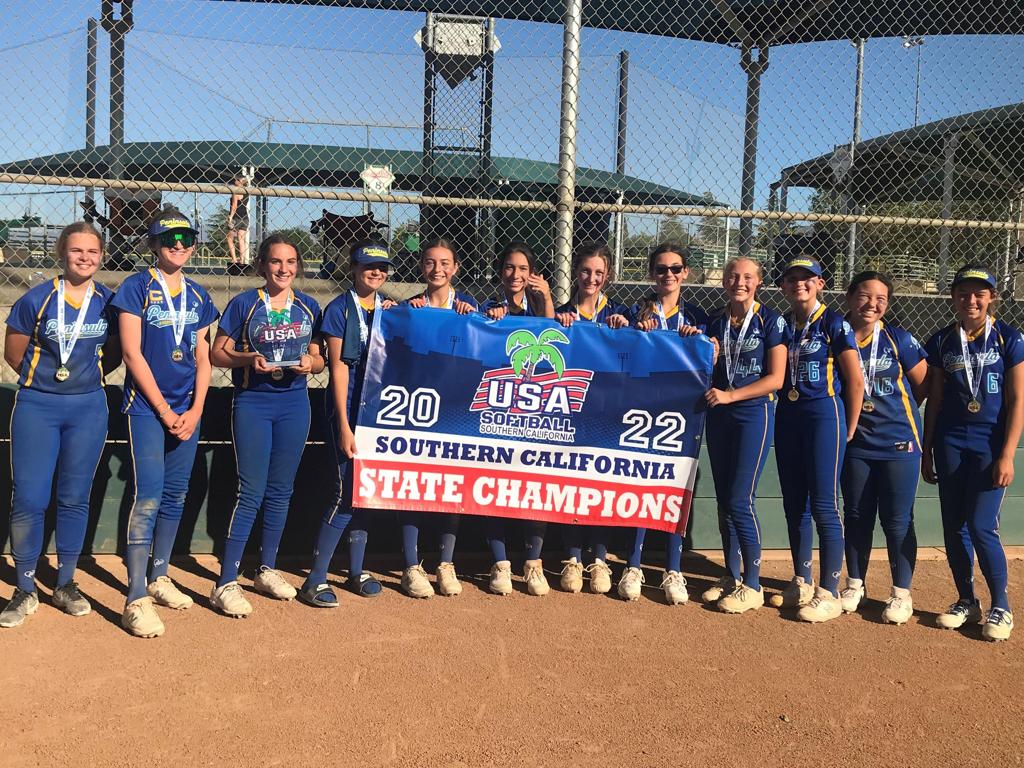 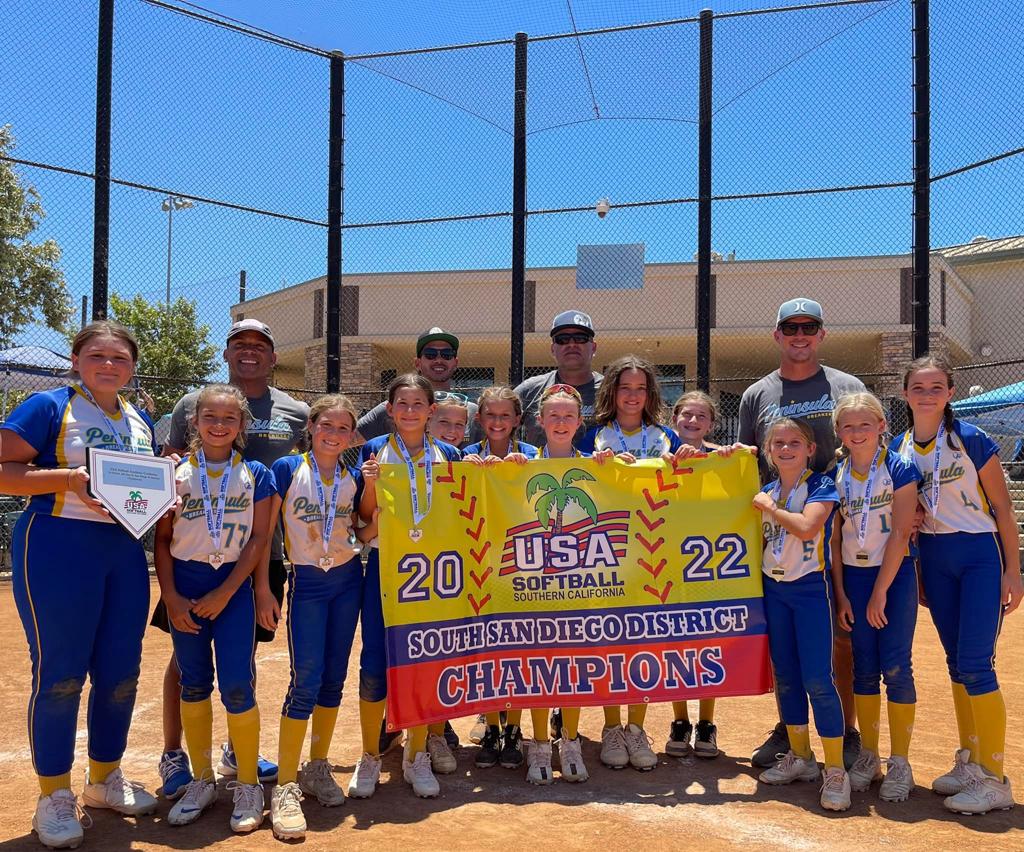 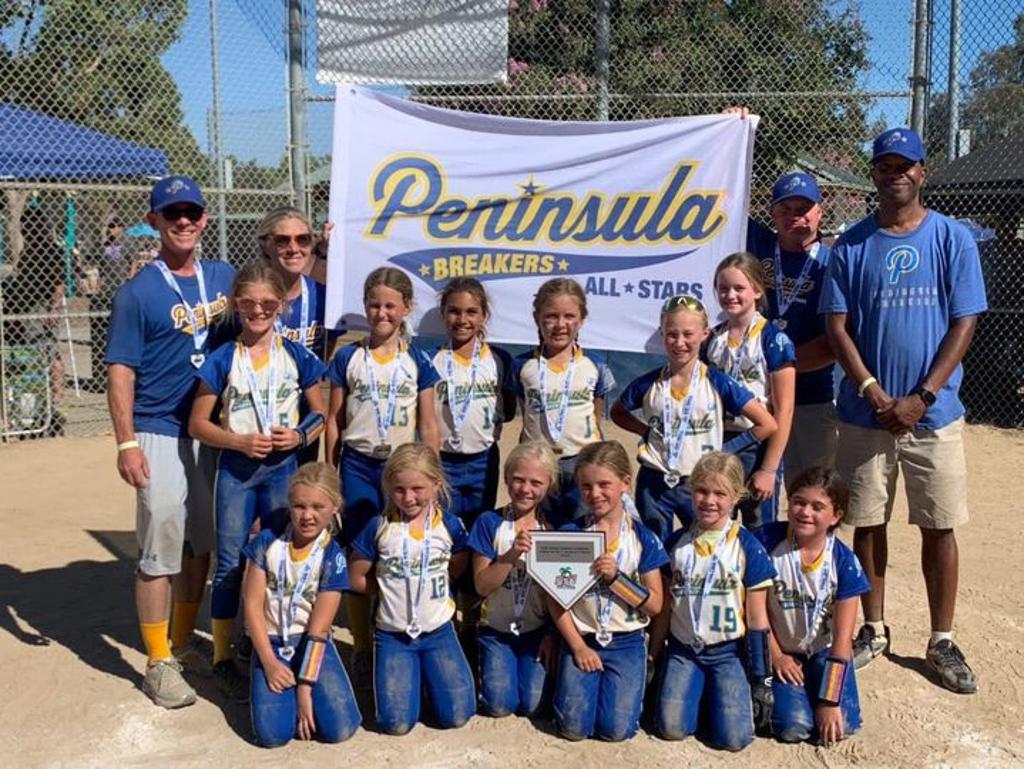 ** All 14U teams in South San Diego District will play on the C District weekend. Their results there determine whether they go to C State or B State.

About the Peninsula Breakers All-Star Program

Peninsula Youth Softball Association has a highly successful and competitive All-Star program. We are proud of our players and coaches who compete at the highest level and represent our league with outstanding sportsmanship.

Our Peninsula Breakers All-Star teams are for the most dedicated and highly skilled players from each year's spring recreational season.

Schedule: The All-Star season starts immediately after the spring recreational season ends. Teams start practicing in early May, and play in tournaments hosted by other local USA Softball leagues every weekend between mid-May and late June. The All-Star season culminates with USA Softball's South San Diego District finals in late June. Teams may or may not qualify from the District finals to go on to the USA Softball state tournament in Lancaster, which is usually the weekend before (for Silver teams) or after (for Gold teams) the July 4 holiday. Girls must commit to the full practice and tournament season to be considered. A tournament schedule will be posted on this page when it is available.

Teams: We usually field Gold and Silver teams in the 8U, 10U and 12U divisions and a Gold team in the 14U division. Bronze teams are possible when we have the talent, coaching and pitching available in a division.

Selection process: We encourage all eligible players from our spring recreational season to apply. In early April, the league will make an interest form available to anyone who would like to be considered for All-Stars. Division coaches and All Star managers vote on the teams, which are usually announced at the end of the spring season.

Cost: There is a separate cost for All-Stars, which covers tournament entry fees, uniforms, helmets and bags (for new All-Star players only), and more. The 2022 cost is $475 per player. This does not include the cost of lodging for travel tournaments. Payment plans and/or financial assistance is available upon request.

The All-Star experience: The experience is different than our recreational spring season. While our spring season is about instruction, development and inclusion, All-Stars is about developing advanced skills and a winning attitude in a highly competitive environment. Some players thrive in this environment, while other players (and their parents) do not. It is important as parents to make this distinction for yourselves as well as your daughters. PYSA is committed to forming the best teams possible that will have the greatest opportunity for success. Our league attempts to keep the teams small to increase playing time. There is no guarantee of playing time or playing a specific position.

What are the qualities of a Peninsula Breakers All-Star?

A Peninsula All-Star is a player who exhibits exemplary qualities throughout the recreational softball season. She has a high skill level, outstanding ability and knows the game of softball for  her age group. A Peninsula All-Star is respectful of her coaches and teammates, sets the standard for good sportsmanship and leads by example. She understands the importance of accepting the role that the coach gives her while maintaining a positive attitude. Peninsula All-Stars represent our league with pride and dignity.

How can my daughter sign up for All-Star consideration?

Families can make their daughter eligible for All-Star consideration in April by completing, agreeing to and signing the All-Star player interest form, which includes a commitment to our parent expectations and for your player to attend all practices and games. This opportunity is available to any player who has participated on one of our spring recreational season teams. Completing this form means your daughter will be considered but is not guaranteed a spot on a team.

Who selects the teams?

The managers in each division observe the players during league play and assessments, and then vote to determine the top 15 players. The top 6 players are placed on the team, and the All-Star manager selects the next 5 or 6 players from the other players in top 15. This process is then repeated for Silver and (if applicable) Bronze teams.

What kind of time commitment is involved?

Teams practice significantly more than regular season teams. Expect daily practices in the weeks leading up to the first tournament and then 3 or more practices per week. Once tournaments start, games could begin as early as Thursday evenings and extend to Sunday, depending on whether the team advances to semifinals and finals. Often you won't know the schedule for each day very far in advance, and occasionally, a game may conflict with school. Tournaments could be anywhere in San Diego County, and 1-2 travel tournaments are possible. Teams who advance to the state championships will travel to Lancaster in early July.

How is All-Star play different from the regular spring season?

All-Stars is a much more intense level of play. We will be playing teams from all over Southern California with very talented players. Each game is challenging, with excellent pitching and fielding as the norm. While all girls are guaranteed play time during the regular season, the same promise does not extend to All-Stars. The managers and coaches will play the best player at each position most of the time, so some girls might not get the same playing time as they were accustomed to during regular season.

All of our All-Star games take place within tournaments, either hosted by other local USA Softball leagues or (for district and state competitions) by USA Softball itself. Most tournaments have either a three-game or four-game guarantee, meaning your team will play at least that number of games over the weekend, but possibly more. In a typical tournament with a three-game guarantee, your team will get the schedule a few days prior for two "pool" games on Saturday. Your team's record in these games will determine the seeding and schedule for bracket play on Sunday. If your team loses its first bracket game, it would be eliminated. But if your team keeps winning on Sunday, you could keep playing all day, into the final rounds.

All tournaments are slightly different; some may start pool play on Friday evenings or start bracket play on Saturday evenings. Some are "double elimination," meaning that you can lose twice in bracket play before being eliminated. Almost all conclude by presenting championship and runner-up awards for each division late on Sunday. Making it all the way to the championship game and earning some "hardware" (trophy, medal or ring) with your All-Star team is the best!

What are the benefits of All-Star play for my daughter?

First, your daughter will experience a high-intensity season with the same group of girls. The camaraderie and team spirit this fosters is second to none. Second, your daughter’s skills will greatly improve. The amount of time she will spend practicing and playing will quickly yield results in her overall softball abilities. With high-level coaching and a higher caliber of playing, each girl can expect to see major improvements in her abilities.

The 2021 Peninsula Breakers had a record year and sent 6 All-Star teams to the state championships in Lancaster!

The Breakers also had an amazing finish at B & C Districts!

8U Gold: Third Place, B District

10U Gold: Third Place, B District

12U Gold: Finalist, B District

14U Peninsula/Santee: Semifinalist, B District

Offshore Lifestyle was created by a team of gritty, hardworking, hard-playing fanatics who know the reward for hard work is good times. Coast to coast, and all the waterways in between, Offshore Lifestyle makes quality gear for your life on the water. Our motto: Work hard. Fish harder. We know what it means to play hard, and we also know what it means to fish hard. We're passionate about everything we do.